Hello,
So I might of figured out a way.
I would send ntopng to MySQL
Elasticsearch would then get the logs from MySQL and forward to Graylog.
Does that sound feasible?

Technically speaking you could pipe it directly into ElasticSearch.

If I’m not mistaken, Graylog can still search through the log-data as long as it ends up in one of its indices.

g can still search through the log-data as long as it ends up in one of its indices.

Would it not be better to use MySQL if optimization is a requirement?

My point was that I believe that Graylog can still query messages that were put into Elasticsearch without the actual help of Graylog itself. @Jan or @Jochen could confirm this.

Take that with a tonne of salt; I am only a newb.

What you say sounds reasonable so it’d be good to get a mod to share their knowledge on this.
I am just worried that sending it directly to Elasticsearch it would bring performance issues later on. I am looking to store 1 year worth of logs. Winevt, Cisco & ntopng.

I am just worried that sending it directly to Elasticsearch it would bring performance issues later on. I am looking to store 1 year worth of logs

If you’re going to store and query logs with Graylog, then you’re going to have to put them into Elastic. I haven’t seen evidence that Graylog2 can query a MySQL database for logging data.

So perhaps I’m misunderstanding your situation and your question.

edit: was thinking of using logstash to get from MySQL to Elasticsearch.

Just some comments.
You do not have to take the advice (from (maybe a) more experienced person). As I read, you guessed it, so do it. Please share your experience.
Graylog add some extra data to the items what stored in elasticsearch (eg. message id, sender address, receiver server id, etc.), take care about it when you import data from mysql. You can check in the graylog’s code what will do the graylog if you don’t use it, I’m not sure.
Try to keep in sync the graylog index retention settings with your import solution, to avoid data loss.

wouldnt I run into issues if I use elasticsearch as my primary datastore? Talking about 1 year of logs here.
Also @Macko003 I hear what you are saying, thought it’s abit hard to comprehend (sorry if that sounded rude, not my intention). Any other input?

wouldnt I run into issues if I use elasticsearch as my primary datastore?

Nope - I know environments aiming for 10 years of storage in Elasticsearch.

You do not have to take the advice (from (maybe a) more experienced person). As I read, you guessed it, so do it. Please share your experience.

Apologies on my part if my posts sounded too much like I’m trying to steer @markinhuszn’s actions. I do not mean to suggest any authority on the subject of Graylog and its constituent parts. I’m still very much a newbie, quickly learning as much as I can.

Thanks for the confirmation. Just out of curiosity, why would you ever run MySQL with Elasticsearch? I mean what would be the scenario? Thanks

Just out of curiosity, why would you ever run MySQL with Elasticsearch?

Is that possible? What is the role MySQL should have?

The role would’ve just been primary data storage. Then Elasticsearch would query it.

neither Elasticsearch or Graylog are able todo this.

neither Elasticsearch or Graylog are able todo this.

So Elasticsearch can’t query into MySQL. So, how would one combine both these softwares?

So, how would one combine both these softwares?

Which are the “both” in this question? Elastic? Graylog? NTopNG? MySQL?

Thanks, but that I already knew.
Perhaps not formulating the question correctly.
Would it be more optimum in terms of performance to use MySQL or ElasticSearch?

Would it be more optimum in terms of performance to use MySQL or ElasticSearch?

These are questions I feel you are better off asking the NTopNG people because it pertains to their application code and not Graylogs… If you’re going to use the NTopNG GUI to query, then all the more so: ask them, not here.

They have some FAQs but they don’t necessarily cover the performance of Elastic vs MySQL as their storage backend.

EDIT:
Heh, there are people using both at the same time, for separate parts of the NTopNG functionality.

Use MySQL and ElasticSearch together, "all in one" nProbe Template?

I'm trying to use MySQL and ElasticSearch together, since elasticsearch is not s…upported in the builtin "Historical Data Explorer". I tried using the -F parameter twice in the config, it shows it's connecting to both in the log, but only seems to export to mysql and not to elasticsearch (when using only one -F with elasticsearch it works). Can I get this to work somehow? And has someone maybe already made a nice dashboard for kibana? (since qbana seems dead) Also, which template and netflow version should I use in nProbe to get all default data (for IPv4 and v6) populated for ntopng, mysql and elasticsearch (using it as sFlow collector)?

EDIT 2:
Right… I’ve gone over your post-history a little bit and apparently you DO want to use Graylog to query the NTopNG data, instead of using the NTopNG GUI. That was not clear to me from just this thread.

So yeah, you are in the right place to ask about Graylog. Your current challenge is that NTopNG can directly output into ElasticSearch, but doing so would bypass the meta-data addition that Graylog usually does (as @macko003 mentioned). That’s not something that is easily solved. 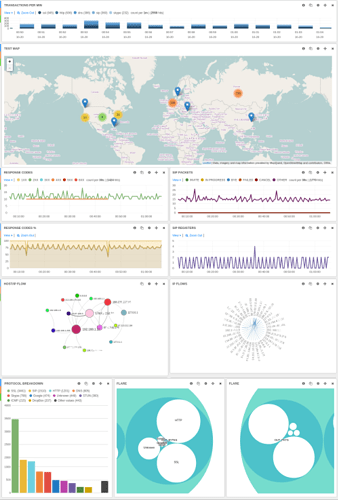 ntopng allows you to export monitoring data do external sources. For low-traffic sites, SQLite and the ntopng historical interface can be a good option. As your traffic increases you are forced to …

So it’s been done, but for different tools.

There are ways of getting LogStash streams into Graylog (for example). So you could make it work by doing:

EDIT 4:
Well looky here! The Marketplace has an input for LogStash. And it also notes something important: it has been replaced with the standard BEATS input. Does LogStash speak BEATS by default? Then this could be your saving grace

Yes, I was able to do this using ELK. Never thought about using Logstash to Graylog. Thanks for the effort you put in man, if any questions arises I will edit this.