Good afternoon, I am collecting and graphing the perfdatas from Nagios of several VMs and I would like to change the Y-axis of the graph below. These two screenshots (2 different graphs set up the same way, the only difference between them is the log used tod raw them) illustrate the problem: 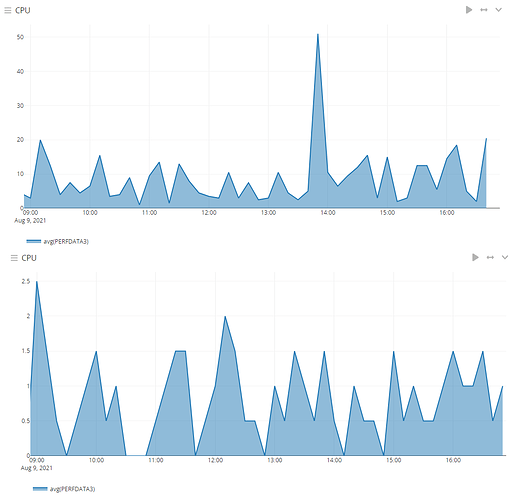 Thank you for your time.

Have you tried the drop-down arrow on the right side?

There are configuration settings on the left when the widegt opens up. If thats not it, could you explain in greater detail what you want to do?

That’s not what I want (or I can’t see it). On the first screenshot that I posted, you can see that the y-axis goes from 0 to 50, on the second, it goes from 0 to 2.5. I’d like to force it to go from 0 to 100 at all time, regardless of the current maximum value. I don’t want to change the data or the graph type, just the range of values on the y-axis.

That is unfortunately not possible at this time.

Thanks for the answer.

If you like you can watch these issues on github, I think they describe your use case as well:

## What? It would be great if we could set something like a base line range for… chart columns. By that I mean an option that allows us to set the default scale of the Y axis for a chart widget. Our charts would better visualize their information if they wouldn’t be scaled between 0 and the highest value. ## Why? We have a chart with six lines which each display a percentage value, and they usually show a vertical range between 0 and 6 percent which makes a line at 6 percent look like a very high / big value, even though it’s not. If we could set the base range to 100 then the chart would be much clearer. ## Your Environment * Graylog Version: Graylog 3.2.3+a9c061c * Elasticsearch Version: 5.6 * MongoDB Version: v4.0.10 * Operating System: Azul Systems, Inc. 1.8.0_212 on Linux 4.19.104+49-ph * Browser version: Firefox 77.0b5

I am charting a value that will never be lower than 60 and never be higher than …80. The current behaviour is to render a Y axis from 0 to 85. It would be great if I could override the Y axis range to 60-80 because this will make it easier to see changes in values. Right now a change from 85 to 75 is hardly noticeable because it's render on such a large Y axis range.