Can you please provide an example to overwrite the graylog Timestamp with my Timestamp from the uploaded logs?

Please refer to the documentation of the set_field() pipeline function.

Without a representative event or two from your logfile it’s difficult to provide an exact example. But generally speaking here’s what you’re going to do:

FWIW I’m pretty new to Graylog as well and found the documentation for this kind of thing pretty straightforward. And I see that jochen just replied advising you check out the pipeline functionality, which long-term is definitely the “right” advice as I believe extractors are kind of the past and pipeline is the future.

Hey Matt,
I tried both methods, still not working and I am not able to figure out what I am doing wrong! 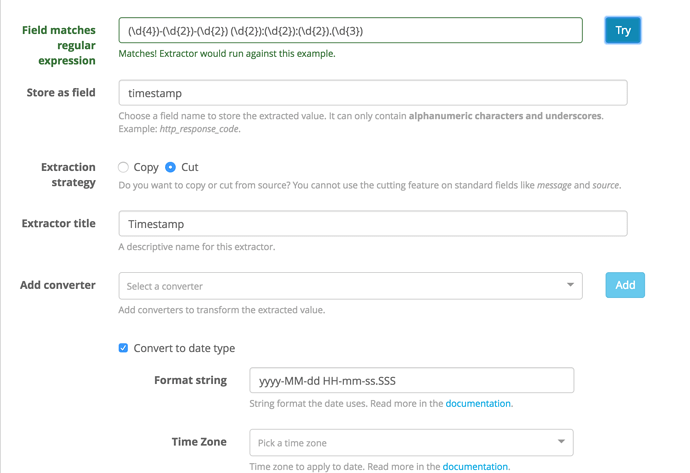 FWIW I don’t think you’d want to cut (in that first example), you’d want to copy into “timestamp” (low case). That should overwrite the Graylog-provided timestamp with the one you parsed out. Also, don’t forget the time zone or your entries may end up in the future/past.

I can’t speak to the pipeline example as I’ve not gone there yet. But do remember that the extractor (or pipeline I’d guess) is not able to go back to info that’s already been indexed. You should narrow your search criteria to the period after you make changes to the extractor/pipeline to see if it’s now doing what you want. You may even have to force the current index to roll.